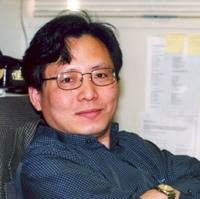 Our current QCD research programs focus on STAR experiment at Brookhaven National Laboratory. We study the properties of the QCD matter at extremely high energy density and temperature and investigate the QCD spin structure functions of the proton. In heavy ion collisions our experimental measurements center on strange, Charm and Bottom quark productions and their collectivity through elliptic flow. Since the strange quark has a mass comparable to the temperature of the QCD matter, their production and evolution can be significantly affected by the dynamics of the QCD matter created. In addition, because phi mesons and Cascade, Omega hyperons have small hadronic rescattering cross sections they also carry the information from the chemical freeze-out of the QCD matter. The Charm and Bottom quarks are mostly produced in the initial stage of the parton scattering and can be used to trace the dynamical evolution. We also search for exotic particles which may be produced in heavy ion collisions.

Our spin physics program focuses on measurements of double spin asymmetry of jet production from polarized p+p collisions which have provided a stringent constraint on the gluon spin contribution in the proton. We are also interested in forward rapidity measurements from transversely polarized p+p collisions and are actively working on detector R&D towards future STAR upgrade and future Electron-Ion Collider.

Our neutrino physics program centers on the CUORE experiment at the Gran Sasso underground laboratory in Italy. We will use TeO2 crystals as a bolometer operating at 10 mK temperature to search for neutrinoless double beta decays. CUORE is one of the next generation double beta decay experiments that are under construction. The UCLA group is working on the front-end electronics project and the experiment is expected to begin data-taking in 2014.