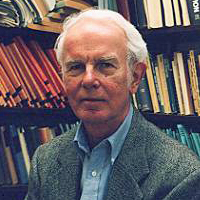 My main research interest now is non-perturbative quantum chromodynamics, both in four dimensions and in three (with applications to the functional Schrödinger equation and to high temperatures). I have also worked fairly recently on the applications of non-Abelian gauge theories to the early universe, in primordial magnetic fields and baryon asymmetry.

The main technical tool for investigations of non-Abelian gauge theories is the pinch technique that I introduced in 1981, which allows one to extract gauge-invariant off-shell Green's functions from the S-matrix. The final result, found later by my ex-graduate student Joannis Papavassiliou and his ex-student Daniele Binosi, is that such gauge-invariant Green's functions are precisely those of the background-field Feynman gauge. (String theorists found the same connection by off-shell extrapolations of string theory derived gauge theory amplitudes, by enforcing modular invariance.)

This and many other results on the pinch technique and its applications to confinement, chiral symmetry breakdown, electroweak theory, and even supersymmetry, appear in the book: "The Pinch Technique and Applications to Non-Abelian Gauge Theories", Cambridge University Press, 2011" by Cornwall, Papavassiliou, and Binosi.

In earlier years I and my colleagues wrote some of the first papers on dynamical symmetry breaking and on three-loop perturbation theory in non-Abelian gauge theories; derived the equivalence theorem relating Goldstone bosons and longitudinal modes of non-Abelian gauge bosons; worked out the properties of the effective potential to all orders; and found many valuable results in multi-particle scattering at high energies. I spent many years working on near-earth space plasma physics and published some 40 papers, although I am no longer active in this field.

This research included fundamental results in auroral and magnetospheric physics, including generation of parallel electric fields and wave-particle interactions that cause precipitation and diffusion of ring-current particles.